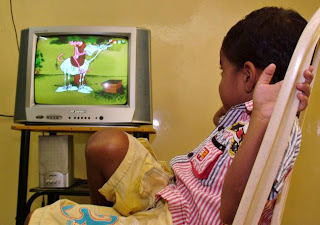 No matter how physically active a child is, time spent in front of the computer or television screen is associated with psychological problems.

In other words, children can't make up for TV time by spending extra hours exercising

According to Live Science:

"... [R]esearchers asked 1 013 British 10- and 11-year-olds how much time each day they spent in front of a computer or TV. The children also wore accelerometers around their waists for a week to track their physical activity and sedentary time ...

The study found that ... more than two hours a day in front of a TV or computer was associated with more emotional and behavioural difficulties."

The findings also suggest that the way children spend their sedentary time, in addition to how much time they spend being sedentary in the first place, matters for their mental health.

Today, less than one-third of kids aged 6 to 17 get at least 20 minutes of vigorous exercise a day.

Compare that to the (US) TV-watching statistics below, and you'll realize just how troublesome the above findings may be. It may even be a crucial part of the equation that might explain why so many children are now using anti-anxiety and antidepressant drugs.

* The average American watches nearly FIVE HOURS of TV a day
* More than half of American children have a television in their bedroom; one study put the number at 70 percent
* Twice as many adolescents with a television in their bedroom watch more than five hours of TV a day compared with youths without a TV in their bedroom
* 90 per cent of American toddlers, under the age of two, watch TV, videos and DVDs regularly
* About 40 per cent of babies, under three months of age, watch TV, videos and DVDs regularly
* Based on a 2007 survey of families in two states, kids at three months watched less than an hour of TV daily, and that viewing time climbed to 90 minutes as children reached the toddler stage

Unfortunately, contrary to what you've been told, this type of educational material may actually retard language development rather than speed it up!

"… [T]he scientists found that for every hour per day spent watching specially developed baby DVDs and videos such as Baby Einstein and Brainy Baby, children under 16 months understood an average of six to eight fewer words than children who did not watch them.

One of the authors stated," The evidence is mounting that they are of no value and may in fact be harmful.

Given what we now know, I believe the onus is on the manufacturers to prove their claims that watching these programs can positively impact children's cognitive development. The bottom line is the more a child watches baby DVDs and videos the bigger the effect. The amount of viewing does matter."

So much for Baby Einstein and teaching your child to use a computer as soon as they're able to press a button, with the hopes of boosting their development...

Exercising more may not be enough, unless you also shut off the TV

Clearly, the vast majority of kids and teens are in dire need of more exercise. However, based on the findings reported in the journal Pediatrics this month, exercising more may not be enough to compensate for the detrimental impact of TV and computer use.

The other side of the equation is shutting off your TV and computer more often.

As reported by Live Science:

"The study found that regardless of age, gender, socioeconomic status, or whether a child had hit puberty, more than two hours a day in front of a TV or computer was associated with more emotional and behavioral difficulties.

Most importantly, the connection between screen time and psychological problems held regardless of how much overall physical activity the kids engaged in."

What that means is that it's not a sedentary lifestyle that poses the greatest risk to your child's mental health, but rather the activities your child engages in while being sedentary.

Other sedentary activities, such as reading or doing homework, had no detrimental impact on the children's mental health

The researchers found that:

* Children who spent more than two hours a day watching TV or using a computer were 61 and 59 per cent more likely to experience high levels of psychological difficulties, respectively

While much of the TV debate focuses on advertising messages and the impact of violent or sexually explicit programming on young minds, there's an even more disturbing aspect to television.

As it turns out, TV may be harmful no matter what programmes your kids are watching or what ads they're exposed to!

Television is one of the most powerful brainwashing devices there is

According to research by Dr. Aric Sigman, a British psychologist, watching TV actually causes physiological changes – mainly changes in your brain chemistry – and there's nothing beneficial about them.

These changes have little to do with the content you're watching, but rather the fact that when you're watching a TV or computer screen, you're in essence entraining your brain to function and process information differently.

Watching a TV (or computer screen) produces an almost narcotic effect on your brain, actually numbing areas that would be stimulated by other activities, like reading.

And, the longer you watch, the easier your brain slips into a receptive, passive mode, meaning that messages are streamed into your brain without any participation from you.

This of course is every advertiser's dream, and accounts for much of the success companies achieve by putting ads on TV.

Watching TV also disrupts the production of the hormone melatonin, according to Dr. Sigman, which could be playing a role in sleep disturbances and even causing early puberty in adolescents.

How to get your kids moving

I think there's no doubt that it is imperative to limit your child's TV, computer, and video game time, in addition to encouraging your child to spend more time doing some form of physical activity.

Overweight and obese children will need at least 30 minutes of exercise each day, and may benefit from closer to 60 minutes.

But even if your child is not overweight, you should encourage him or her to take part in physically engaging activities after school and on the weekends – the benefits are just too plenty and too varied to be ignored, including boosting mental health.

Encourage your child to engage in activities that are naturally interesting to them, such as playing on the monkey bars, rollerblading, skateboarding, dancing or playing basketball with friends.

Allow your kids to exercise in bursts throughout the day – a game of tag here, a bike ride there – so they don't feel pressured or like they're being "punished."

Like adults, kids need variety to their exercise routines, so be sure your child is getting in aerobic, interval training, weight-training, stretching and core-building activities.

This may sound daunting, but if your child participates in a gymnastics class, sprints around the backyard after the dog often and rides his bike after school, you'll be covered.


Last but not least, remember that you act as a role model by staying active yourself

If your kids see you embracing exercise in a positive way, they will naturally follow suit. Plus, it's easy to plan active activities that involve the whole family and double up as fun ways to spend time together.

Think of it this way … by taking the time to get your kids interested in exercise now, you're giving them a gift that will keep them healthy and happy for the rest of their lives. Combine that with reduced TV and computer use, and you're giving your child the best platform possible for a healthy, long life – physically, mentally and emotionally.

Dr. Mercola founded one of the most visited health sites on the Internet, Mercola.com and has a practice, the Optimal Wellness Center, in the northwest suburbs of Chicago.