Significance of marriage ceremonies in your marital life -Hindu marriages 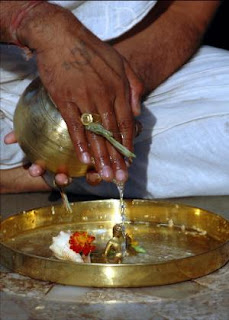 Significance of marriage ceremonies in your marital life -Hindu marriages

Indians view marriage as the strongest bond that unites a man and a woman. Marriage bonds the soul of a man and a woman to a single power and they can direct the energy associated with their individual instincts or passion, into the progress of their souls. In India marriage ceremonies and rituals share a prominent place with the future marital relationships. Even though the many religions and their marital rituals vary from one another, those marital rituals and ceremonies have profound meanings and influence in the couple's future life. In this article we would discuss the traditional and contemporary Hindu marriage rituals.

The Hindu marriage ceremony consists of many rituals. In ancients days the Hindu marriages used to extend for two to three weeks. The rituals may have slightly varied in accordance with the communal and regional differences. Let us see the significance of these rituals and their influence on the life of a married couple.

The Hindu marriage ceremonies start when bridegroom arrives with his family and friends in a procession (Baarat). This is a simple step to show the consent and joy of both the parties in the marriage. The priest will evoke the blessings of the Gods and forefathers with Vedic Mantras. As a first step the bride will offer the groom yogurt and honey as a token of purity and sweetness. The bride's and bridegroom's exchange of garlands symbolizes their greetings to each other for a new life.

'Kanyadan' or giving the bride to the groom is the most important aspect of the Hindu marriage ceremony. At this occasion the bride's guardian requests the groom to assist her in the major aspects of life as love, money or duties and the groom pledges to do so. The knotting of the bride's and groom's garments signifies their union. They grasp their hands together (panigrahana) in front of every one and recites Vedic hymns for happiness, long life, and a lifelong relationship. The bride offers food to the fire to symbolize that her acts will give prosperity to husband and relatives. The couple walks around the nuptial fire seven times with Vedic chants to pledge their relationship, love, honesty, trust, protection, devotion and duty. At the end of each round of nuptial fire, both the bride and the groom step on a stone and offer a prayer for their mutual love to be firm and steadfast like the stone. They touch each other's heart and pray for union of their hearts and minds.

The Mangala suthra Dharana is of prime importance in Hindu marriages. The groom ties the thread containing the marks of the Vishnu or Shiva in the neck of the bride to assure the holy blessings for his wife as long as he lives. The groom then places sindhoor (red powder) on the bride's forehead symbolizing her as a married woman. The groom's parents bless the couple and offer cloth or flower to the bride symbolizing her joining of the groom's family. The marriage comes to an end while all those assembled shower flowers on the couple and blesses them to show their consent or happiness.

The modern day lifestyles and love marriages have changed a lot of concepts behind Hindu marriage ceremonies. However the significance of these rituals still remain constant.