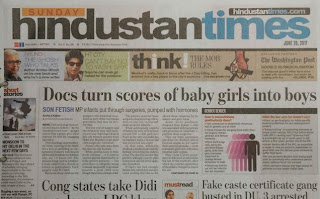 A sensational story in Hindustan Times about surgeons in Indore performing hundreds of sex change operations on children turns out to be false and misleading. An investigation.

Last month, a Hindustan Times front page report claiming that Indore doctors were converting hundreds of baby girls into baby boys sent shock waves through the system, with everyone from the Prime Minister's Office to the National Commission for Protection of Child Rights (NCPCR) to the Indian Medical Association (IMA) swinging into action.

As it turns out, they need not have bothered. Senior doctors and surgeons say the operation, described on the front page of that newspaper as "turning girls into boys," is medically impossible.

In interviews to The Hindu, several doctors accused the journalists and editors involved in reporting, writing, and packaging the story of inaccuracy, sensationalism, and an unseemly rush to grab the headlines without checking facts. The fact that the story has generated confusion and controversy over a little-known, but hugely important, medical procedure for infants born with abnormal genitalia — genitoplasty — is seen by experts as particularly unfortunate.

"It is medically impossible to change a female child into a male," says Santosh Karmarkar, a consultant paediatric surgeon at Lilavati Hospital in Mumbai. HT's description of the operation — "Penis built surgically using tissues from female parts" — carried in an information graphic alongside the article, is "completely false," he said. "In fact, the opposite may be possible, to convert a male phallus into a clitoris. But it is impossible to build a child's penis," he reiterates.

S.V. Kotwal, a senior consultant urologist who has performed 32 sex-change surgeries on adult patients at the Sitaram Bhartia Institute in Delhi, agrees: "You cannot create a penis and testes on a child. No one has ever done a sex change operation on a child in published English medical literature. It is impossible."

So what is the "controversial" operation that the doctors of Indore are actually performing? It seems to be a corrective surgery, regularly recommended by paediatricians and urologists when faced with a child with congenital abnormality of the genitalia. For example, the penis may be small or seem missing because it is buried under the skin due to abnormal curvature.

"It is about making a male child a better male, functionally or structurally. It's not about converting a child's sex," said Dr. Karmarkar.

Ironically, the HT article quotes the Indore doctors also saying that the operation is performed on children with ambiguous or abnormal genitalia. "They say these operations are done on children whose internal organs do not match their external genitalia — most commonly, girls born with some internal male organs," says the article.

But there is no explanation of why these babies are to be arbitrarily considered "girls" if they have male organs; in fact, sexual identity is determined by a wide range of factors, including genetic and chromosomal make-up, external appearance, and the rearing of a child.

Asked for an explanation of the discrepancies in the front page story, HT Editor Sanjoy Narayan referred this reporter to the newspaper's Bhopal Resident Editor, Abhijit Majumdar. "We never said anywhere in the article that they are perfectly healthy girl babies which are being converted," said Mr. Majumdar, defending the Indore report.

However, the headline and lead of the HT article certainly read as though Indore's doctors were converting healthy baby girls into baby boys by the hundreds. It is only much later in the story that the reporter bothers to inform readers that there is a medical reason behind this operation, rather than parents blindly demanding a boy child.

Mr. Majumdar admits that the story left this as an "area of ambiguity." He attributes the faulty description of the operation to the Indore doctors themselves, quickly pointing out the corrections in subsequent coverage. "The media are not medical experts, we will go by what the doctors say," he said.

Both the Indore doctors quoted in the initial article — Milind Joshi and Brijesh Lahoti — say that they never described genitoplasty as "turning girls into boys." Asked if the paper had misquoted him, Dr. Joshi replied: "Misquote? They printed a completely made-up story and kept harping on it for several days to top it [all]."

In an email letter to HT sent on the day the story was published, the Indore chapter of the Indian Association of Paediatric Surgeons refuted the article's basic assertions. "We the Pediatric surgeons of the city have never ever performed any surgery to convert a normal female child into a male child because it is not possible even to think about it practically, technically, medically anywhere in this world," said the email, shared with The Hindu by Dr. Joshi.

The letter goes on to explain how patients are scientifically evaluated by a team of doctors, clearly describing some of the abnormalities and how they are surgically corrected. The email says the number of surgeries and the supposed cost published in the newspaper were also false. The newspaper did not quote from this explanation in any follow-up coverage.

Curiously for such a potentially explosive story, the newspaper seems not to have done any basic research. In fact, a simple Google search for genitoplasty throws up a peer-reviewed study by All India Institute of Medical Sciences (AIIMS) doctors at the premier institution's Paediatric Intersex clinic, offering a clear description of the operation, destroying the newspaper's assumption that it should not be performed on children, and offering the facts and figures so badly missing in the article.

The number of surgeries

At least one figure — which sparked off much of the national alarm — is provably dubious. The article said that "genitoplasty experts of Indore say each of them have turned 200 to 300 girls into 'boys' so far," listing seven such experts.

"Well, three doctors told us they had done about 200, 300 surgeries," Mr. Majumdar told The Hindu, not explaining how that figure was then extrapolated to include the remaining four doctors. He then admitted: "Initially, the doctors may have thought our article would be a good advertisement for them, so they may have exaggerated."

"The reporter has not done enough homework," said Amar Jesani of the Indian Journal of Medical Ethics. "She has not found a single girl actually converted into a boy. It's a very general, vague story which only casts suspicion due to the large number of such surgeries that are being claimed." Once that "large number" is questioned, the premise of the story could collapse. Dr. Jesani now suggests that the Medical Council of India force the Indore doctors to open up their records to produce the hard facts that are missing in the HT story.

The problem is that those facts may end up telling a very different story.

Dr. Kotwal says he was interviewed by an HT correspondent in Delhi before the original story was published. "I told them that if you want to do investigative journalism, then do it," he said. "Don't just go by rumours. Find the records, find the children, do a case study." His advice was not taken, nor were his quotes used. "But [the correspondent] told me that they could not wait, because there was such 'cut-throat competition…They were in such a rush to have a sensation.'"

By design or coincidence, the story was front-paged by HT on the same day that DNA, one of its competitors, launched its Indore edition. Mr. Majumdar says the story had been worked on for over two weeks — during which a case study could not be found as parents were unwilling to talk — and denied any knowledge of the interview Dr. Kotwal had given to an HT correspondent in Delhi.

With medical criticism of the piece increasing, Dr. Kotwal was asked to present his point of view in an op-ed article two days later. Meanwhile, the newspaper continues to publish follow-up stories lauding the "impact" of the original article without any attempt to plug its factual holes.

In fact, HT does not seem to have gone back to the Indore doctors it originally quoted for any of its follow-up stories. When The Hindu asked Dr. Lahoti if he had been questioned by NCPCR after the HT story came out, he said: "They asked us several questions and seemed determined to confirm the HT reports but they couldn't find anything." Dr. Joshi added: "All the paediatric surgeons of Indore were asked by NCPCR individually about whether this surgery was done or not by us. Our answer was this is not possible anywhere in the world and hence we also did not perform any such surgery. Our records were also very clear." He warned that both doctors and innocent patients would suffer from HT's coverage. "This malicious story has caused immense damage to our professional reputation and is beyond repair. This will create problems for the patients and will HT bear their sufferings?"

"Our intention was not to sensationalise, or to do a sting operation to 'expose' doctors," said HT's Majumdar. "We genuinely wanted to raise awareness about the grey areas, move the conversation from the closed doors behind which it is between a doctor and the parents and create public debate about the need for monitoring or legislation."

There are genuine issues that need to be discussed in the public fora. For instance, doctors say that corrective surgeries are more often needed for common male defects, leading to the false impression the newspaper gave that "girls are being converted into boys."

However, in cases of extreme ambiguity, where the child is considered "intersex," the doctor must "assign" the sex of the child before deciding how the genitalia are corrected. The AIIMS study admits: "The gender assignment takes into account the prevalent social factors in a community and the parent's desire." This could well mean that in some cases, the desire of Indian parents for a boy could be influencing the doctor's assignment of sexual identity.

There is also a wider international debate on whether corrective surgeries should be done at all on such children, or whether "intersex" children should be left to decide their own sexual identity upon reaching adulthood.

Unfortunately, an alarmist and misleading headline, some glaring errors, and the sheer absence of any hard facts may well have undermined any journalistic intentions of raising awareness and generating an honest debate.

(With inputs from Mahim Pratap Singh.)