What does your blood type say about you?

What does your blood type say about you?

A Japanese minister has resigned, saying that his blood type accounted for his failings. According to Japanese belief, what might yours mean? 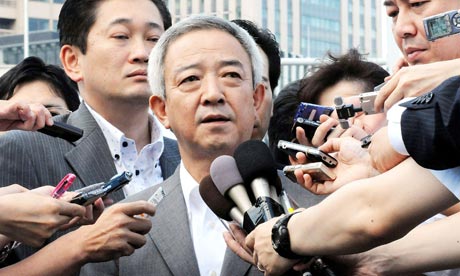 It came away in my hands. The dog ate it. Honest. When Ryu Matsumoto, Japan's minister for reconstruction, resigned after just a week in the job, one of the excuses he offered was almost as lame. He said he had the wrong blood type – B – which made him a more abrasive personality and accounted for his less-than-tactful remarks about some areas of Japan badly affected by the earthquake and tsunami earlier this year.

Most people in the UK haven't a clue what blood type and aren't much bothered either way. But in Japan there is a widely held belief that blood groups can predict personality, temperament and compatibility with other people; so much so that many newspapers, magazines and TV shows carry daily blood horoscopes.

The idea took hold in the 1920s, when Japanese doctors were looking for proof that the Taiwanese were racially inferior and found that 41.2% of them had type O blood compared with only 23.8% of the Japanese. Even though this theory was discredited in the 1930s, its influence still lingers in popular culture. And why not? It's no sillier than believing your personality is determined by the conjunction of the planets.

It's also no less vague, which makes it ideal for predictive purposes. According to Japanese equivalents of Jonathan Cainer, the good points about being type B are that it makes you wild, creative, passionate and strong while the downsides are that you are selfish, irresponsible, unforgiving and unpredictable. Though surely if you can predict that someone is unpredictable . . . Still, let's just assume that Matsumoto had rather too many of the bad B blood cells.

You can also be creative if you have type A, though it's clearly a very different type of creativity from type B; one that comes with earnestness, patience and responsibility. Get the mix wrong and you could become over-earnest, stubborn and tense. Which is very bad. Type ABs are either controlled, rational and sociable or critical, indecisive, irrational and irresponsible, while Type Os veer between being agreeable, sociable and optimistic and being vain, rude, jealous and arrogant, depending on your heart rate – or something.

So what are we to make of our own politicians? Vain, rude, jealous, arrogant, selfish, critical, unforgiving, stubborn and indecisive probably sums up most of them, though that would make them a unique ABABO hybrid. But it does leave some telling gaps. What blood type determines selective memory and a pathological ability to swear black is white? And does Ed Miliband have a special stupidity blood type? And what about the Cleggster, a man self-destructively attracted to abusive political relationships? There again, he's unlikely to be a politician for much longer.