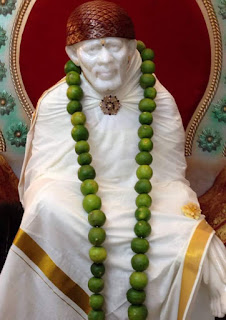 When I was in Indore on my official duties, one day my Client's Mother expired at an old age and I had to attend the funeral rites.

My client has Two sisters, one stationed at Ratlam, and the other in Bombay. Immediately he got in touch with his sister in Ratlam and they could reach quickly, as it is a very near place from Indore.

The other sister residing at Bombay, was also contacted on telephone but unfornunately he got a message that all of them had gone to Shirdi for Baba's darshan and were expected after a couple of days. Since, there were no hopes of contacting them at Shirdi, they were planning for the funeral rites.

At about 11.00 a.m. when everything was ready, suddenly an auto-rikshaw reached the house, in which the eldest daughter of the old lady, her husband and children were there.

It was great shock for the family that arrived from Shirdi, who were not expected to see the face of the old lady. This was big surprise for the big gathering.

You know who has done this big follow-up? It is none else than our Lord Sainath from the Samadhi at Shirdi.

I had made enquiries with the eldest daughter of the old lady who died, as to how they could drop in at Indore. She said that after compleating Baba's darshan at Shirdi, they were planning to return to Bombay, but she had a vision of Lord Sai Baba, who had directed her to go to Indore, to see her ailing mother, as they were half the way to Indore.

All the families of Indore, Ratlam and Bombay are the devotees of Lord Sai and they were very grateful to Baba for his good turn.

So devotees of Baba, please note that our Lord Sainath is still alive and from the Samadhi at Shirdi, he performs all these miracles.