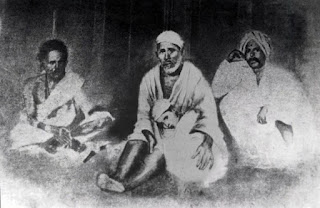 In his researched article, Balasaheb Deo writes, If Shri Sai Baba is considered to be an incarnation of Lord Krishna, then Madhavrao must be regarded as Arjun. In Shri Sai Sat Charita, Hemadpant has pictured Baba as Lord Shankar and Madhavrao as His Nandi.

Any person studying Shri Sai Sat Charita will observe that-amongst the devotees who were close to Baba- Madhavrao comes near the top. Amongst the followers of Sai, there would not be any one who does not know Madhavrao.

He served Baba till the end of his own life. Baba gave him the respect like Arjun - the place of a friend close to heart. It is a very vivid example of devotee-friend.

Madhavrao - a person with great religious merit - was born in the year 1860 (Shake 1872 Margasheersha Shuddha Panchami) in the family of Yajurvedi Deshastha Brahmin. His birth took place in village Nimon (Sangamner taluka, Nagar district) about 20 miles to the west of Shirdi.

Madhavrao's mother was the fourth wife of his father Balwantrao. His first three wives did not bear any child. He, therefore, married the sister of Laxman mama Kulkarni, a resident of Shirdi. He had three children from this fourth marriage. Of them, Madhavrao was the eldest. He was followed by Kashinath - who was adopted by another family and was named as Ganesh Shridhar Deshpande. Bapaji was the youngest brother of Madhavrao. (His story appears in Shri Sai Sat Charita).

When Madhavrao was about 2-3 years old, his father came to stay at Shirdi with his entire family. Up to standard V-VI, Madhavrao's education was carried out at Shirdi itself. As his entire life was spent in the rural atmosphere of Shirdi, his spoken language contained many impurities and many usages from the rural area.

Madhavrao got married twice. His first wife was Savitribai. He had one son from her. His name was Eknathpant. His wife Ushabai was the daughter of Gopal Kacheshwar Kulkarni of Nighoj village. The name of Madhavrao's second wife was 'Dwarkabai'. They had two sons Jagannathpant and Uddhavrao - and a daughter - Babitai - from this marriage. Babitai was married to Narayan Nagesh Wande of Parner village in Nagar district.

Madhavrao was tall,robustly built and very healthy. His complexion was wheatish. He used to have a square diet and had a healthy appetite. Up to the age of 72, he did not suffer from any ailments. He did not suffer even from simple maladies like fever or head-ache.

He entirely adhered to ancient religious traditions. His conduct was sacred and strict in observance of religious rites. Barring a few known households, he never used to have meals at others. He was expert in cooking. Therefore, generally he prepared meals with his own hands.

After completing his own education, for a few years, he taught in the village school. Thereafter, till the end of his life, he worked as a village doctor. He used to give medicines after saying Baba's name.

From the beginning, Baba used to call Madhavrao as Maza Shama (My Shama). Once, Kakasaheb Dixit was overcome with emotions and went to Baba. Baba asked him "What do you want?" Kaka replied, I wish to be around You forever. Baba said, Kaka, keep this Shamya with you. It will mean I am with you. From that day, Kakasaheb accorded the same respect to Shama which he used to give to Baba.

Seniors like Bapusaheb Butti and Narke also treated Madhavrao with the same reverence.

As Baba used to call Madhavrao as Shama, he used to refer to Baba as Deva. Majority of the devotees used to place their questions or other matters before Baba by going through Madhavrao. Even elders like Bapusaheb Butti and Kakasaheb Dixit approached Baba through Madhavrao.

The end of Bapusaheb Butti's life had come very near. Madhavrao was beside him. Butti was still conscious. He called Madhavrao near him and said, Madhavrao, now I am unable to bear the pains. It will be better if Baba takes me near His Feet. I know you very well. When I am near you, I feel as if I am near Baba's Feet. While uttering these words, tears were flowing from Bapusaheb's eyes. He was overcome with emotions and placed his head on Madhavrao's feet regarding them to be Baba's.

Once, while in Shirdi, Kakasaheb Dixit suffered from Navajwar (a deadly fever which lasts for nine days). Lots of risks are associated with this disease and in those olden days, many times it used to prove to be fatal. Baba told Kaka to go his home in Parle. Kaka was unable to understand, why Baba was asking him to go to Parle instead of keeping him near him. Just then, Baba said, Take care. Take this Udi and take Shamya also with you! Even though, Kakasaheb was suffering with the illness, he was happy that Madhavrao was coming with him. Those 9 days were really difficult for Kakasaheb. However, he survived on the strength of his devotion to Baba and company of Madhavrao.

Whenever Madhavrao was not in Shirdi or was not present in the Masjid, a few devotees would communicate directly with Baba and place before Him their difficulties. However, the answers given by Baba at such times used to be somewhat different.

Once, Shri Narke received an offer for a temporary job at Brahmadesh. As Madhavrao was not there, Narke asked his question through Dr. Pillay. Baba replied,Go to Brahmadesh. It is ours. Dr. Pillay again asked, Baba, is the job there good? Will he be made permanent in the job? Baba said,Yes!

Due to Baba's affirmative reply, everyone thought that Narke is going to get a permanent job in Brahmadesh. However, Baba had earlier told him that he will be a permanent resident of Pune. After Narke went home, he told the events to Madhavrao. Madhavrao asked Baba, Deva! Which is true-what you told me or what you told Bhau (Baba used to call Dr. Pillay as Bhau)? Dr. Pillay also covered his mouth and smilingly repeated the same question. Baba answered, what I told Shamya was the truth.

It was in 1913, Narke first came to Shirdi. At that time, Shri Butti and Shri Dhumal introduced Madhavrao to him saying- he is a very useful person in Shirdi .And in reality, Madhavrao was a very helpful person in Shirdi. Though he was a Bhikshuk Brahmin from a small village, his face used to radiate like that of a learned person from a city. Baba used to talk in riddles. But, as Madhavrao had spent considerable time with Baba, he was able to catch the meaning very quickly.