Presence of mind in dealing with emergencies 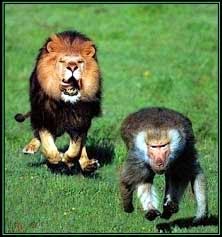 Once, a dog lost his way deep into the jungle.

He almost fainted to see a lion coming straight to him at a very near distant.

"I will be dead today”, thought he.

There were some bones lying over there.

He turned his back towards lion and started pretending as if he is eating those bones...

When lion was very close to him he cried out loudly "Wow, what a fun eating a lion, by chance if I can get another one, it will be a treat ".

Lion thought "What a dangerous dog!!!!! He kills lions and eats it. Let me run away from here and save my life ".

Now, there was a Monkey hiding on the tree there watching the entire show.

He thought "It's a good chance to tell the truth to the lion. Lion will become my friend and I will not have to run saving my life from him ".

He just ran away to inform the entire episode to Lion.

The dog had seen him going and quickly understood the ploy.

Both lion and monkey were coming back to the dog and the lion was furious.


When lion was very close to him he again cried out loudly " It has been half an hour and yet that stupid monkey can't fetch another lion??!!!!"

Morale: "It is by presence of mind in untried emergencies that the native metal of person is tested."