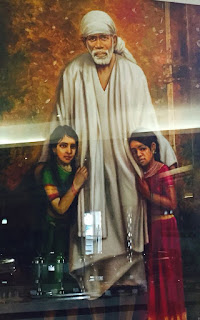 The night after Baba's departure, I saw His body in a dying condition in my dream and said, 'Baba is dying'. Baba replied, 'People do not talk of saints as dying, but as takingsamadhi'. His body was still. People were mourning. Such was the dream. I felt sad. I woke up at 12-30 midnight. In the morning we got from Anna Chinchinikar a post-card that Baba passed away at 3-00 p.m. on holy Dasserah, 15-10-1918."

On the day following His Mahasamadhi i.e., on 16th of October, Baba appeared to Das Ganu in his dream at Pandharpur and said, "The masjid has collapsed; all the oil men and grocers of Shirdi have teased Me a lot; so I left the place. I therefore came to inform you here; go there quickly and cover Me with Bhakkal flowers." Das Ganu came to Shirdi and started bhajan and kirtan before Baba's samadhi which he garlanded. Later he fed a large number of people in Baba's name.

"I shall be alive and vigorous from the tomb also."

"Even after My Mahasamadhi, I shall be with you the moment you think of Me at any place."

And He stands by His word even today. And that is taking samadhi."