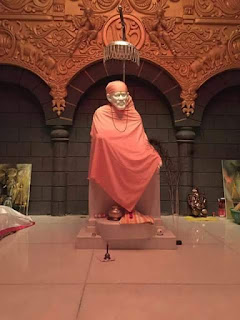 Baba asked Purandare to build a house, for himself and his family, at his own expense. Purandare, with great difficulty, bought land in the desolate Bandra suburb. He started construction, but was plagued by severe headaches. Unable to bear it anymore, he wrote to Baba, pleading that, instead of giving him such unbearable pain, He had better put and end to his life. This letter he gave Dr. Pillai, with the request to give it to Baba. Upon the receipt of the letter, Baba's heart melted and He sent some Udi and snuff like powder in a small packet. He asked Purandare to inhale it, and Purandare did just that and the headache was gone. A few days later, he wrote to Baba, asking Him when he should do 'Gruha-Pravesh'. Baba replied, "You may perform 'Gruha - Pravesh' on Thursday. I too will come along with you."

So, on Thursday, Purandare made 'naivedya' for Baba. Then with Baba's photograph clasped to his chest, he proceeded to the house. Being rather poor, he couldn't have an elaborate 'Pooja' and rituals. As long as Baba's photograph was there first with naivedya, everything would go well, he thought. To his surprise, as he was walking past the Datta Mandir, he saw Baba there. Baba accompanied him to the new house, till Purandare reverentially placed Baba's photograph on as 'aasan' and then vanished.

Leela- 67 in Ambrosia in Shirdi - Part-I