THE WISE DO NOT QUESTION 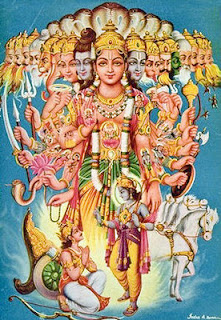 THE WISE DO NOT QUESTION

When the Kurukshetra war was over, pride entered the heart of Arjuna. He even thought that he was so great that Krishna had become his charioteer.

Finally, Arjuna had to yield. Swallowing his pride, he got out of the chariot with great reluctance.

Now it was Krishna’s turn. As soon as He stepped down, the chariot went up in flames.

Arjuna was humbled as he realized that the deadly arrows and missiles that had struck the chariot were powerless so long as Krishna was in it. As soon as He left it, they had their natural effect and the chariot was reduced to ashes.

In everything that the Lord permits to happen, is a meaning of His mercy. We must not question: we must not argue. We must only obey, accept and rejoice!