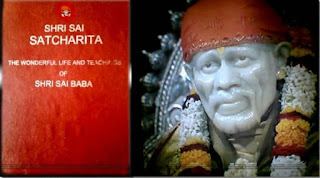 Many years ago I heard from some of my friends about Shri Saibaba of Shirdi and His Miracles; but unfortunately for me, He did not draw me to Him while He was living. Some 13 or 14 years after His passing away, I had gone to my noble and worthy friend, the Late Mr. K. G. Deshpande, Bar-at-Law, of Baroda, at his temporary residence at Charni Road, Girgaum, at Bombay. There I happened to see for the first time Shri SaiBaba. His small portrait was kept in the household shrine for worship. Then 4 or 5 years later, I saw with my friend - The late Mr. K. G. Ajrekar, Government Pleader, the book "Shri Sai Satcharitra" written in Marathi (ovi-verse) by Mr. Govind Raghunath (Anna Saheb) Dabholkar alias Hemadpant, and some stray nos. of "Shri Sai Leela" (Marathi Magazine). When I went through the book and the magazines carefully, I felt a very great love and devotion for Saibaba, who then captured me. In 1936, I went to Bombay for some private work and had a mind to go to the Holy place (Tirth) Shirdi on my way home, but finding that I had not sufficient money for the pilgrimage, I changed my mind. With that little money I had, I purchased (1) Shri Sai Satcharitra (Marathi), (2) Shri Sai Baba of Shirdi - a glimpse of Indian Spirituality (English) by R. B. M. W. Pradhan, (3) Two Marathi pamphlets named Sainath Sagunopasana and Sai Leela Kirtan- anka (a special No. of Sai Leela Magazine) and (4) pictures of Saibaba, and thus brought " The Real Saibaba" home with me. Since then, He has been staying with me and guiding me in all possible ways.

In 1941, I made a pilgrimage to Shirdi and took darshan of Shri Saibaba (His big Picture) in the Dwarakamayi, the Samadhi Mandir, as also of the Chavdi, His Guru's Samadhi under the Neem Tree and the Lendi bag etc. After my return, I began to write articles in simple Marathi prose in the Sai Leela magazine describing His Leelas under the caption "Shri - Sai Gathamrita". Seven articles have been already published and others are to follow.

Knowing my short-comings very well, I had no mind nor intention to write anything in English about Shri Sai Baba, but it seems that He has forced this very thing on me in this wise. Mr. S. N. Khakar, the then editor of Shri Sai Leela magazine wrote to me a letter dated 12-8-1943 stating- "In the English section of each issue of Sai Leela, in the absence of competent contributors coming forward as at present, the South Indian devotees desire that if in each issue a purport of each chapter of the Sai Satcharitra is given in English, it may be greatly appreciated by the South Indian subscribers as they have an ardent desire to know and be possessed of the teachings contained in that book, which being in Marathi is a sealed one to them. I, for one, look upon you as the only Bhakta who can take up this work and help in Baba's Service." I could not but comply with Mr. Khakar's request and therefore rendered a few chapters of the book in to English and sent them to him for perusal and approval. He and the Sai Sansthan Committee approved of my rendering and asked me to go on with the work. I sent the chapters as they were ready and they began to appear in the English section of "Sai Leela". Up till now seven chapters have been published therein. The "Sai Leela is now a quarterly magazine and if one chapter were to be published every third month, it will take many years for the completion of the whole work which contains more than 50 chapters. So Sai Baba in His mysterious way suggested to me to finish up the work soon, and helped me to accomplish it in the last Chaturmas (monsoon). As I worked from day to day, I found that I sometimes stumbled upon many difficulties, but they were soon solved somehow or other by His Grace, and thus the whole work was completed within 3 or 4 months. I am very glad to mention here that my spiritual friends Dr.V.H.Date, M.A., Ph.D. of the Lingraj college Belgaum and Mr. D. L. Nirokhekar, B.A.LL.B and M.B.E. of Nasik, have gone through the whole MSS carefully and very willingly assisted me in this service of Saibaba, as also some other friends, with their suggestions and encouragement. May Shri SaiBaba bless them all?

I may mention here in passing that I belong to the same community and same Gotra (Bhardwaj) to which Mr. Hemadpant belonged and I also bear the same alias name, the only difference being that he was called Annasaheb while I am merely Anna.

Lastly, I conclude this short preface with a short prayer that "May Sai Baba Bless us, one and all, and lead us on the path of self-realization!' Amen.

Bow to Shri Sai. Peace be to all.

Since the foregoing lines were written, I am very sorry to state that Rao Saheb Yashwant Janardhan Galvankar. B.A., residing in 'Sai Prasad" Bandra, a suburb of Bombay, passed away early in September 1945. He was the son-in-law of Mr. Annasaheb Dabholkar alias Hemadpant the author of "Sai Satcharitra" and working as a senior superintendent, Home Department, Secretariat, Bombay.

After his retirement from Service, he devoted himself heart and soul to the service of Shri Saibaba. He was one of the working and prominent members of the "Shri Saibaba's Sansthan Committee" and took great interest in its deliberations and work, latterly he was also the editor of the "Sai Leela" magazine and published in it the above mentioned seven chapters and two more, in all nine chapters of the present work (English Sai Satcharitra). He was a very well-read man and had a special liking for, and took great interest in the literature of the sages and saints. He had very carefully gone through this work and written to me time and often that the rendering was correct and excellent as it conveys the exact meaning and sentiment of the original author. He wished most heartily, and tried his best, to publish this work as soon as possible, but owing to the scarcity of paper and paper - control regulations, the publication had to be postponed. I do feel very sorry that he did not survive to see the book out. He was, before his passing away, doing all the while Saibaba's work and I do not know why he was called away so soon. Perhaps, Saibaba wanted him for some other work of His. As we know, His ways are mysterious and inscrutable, and we have to submit to what He decrees. May He help him and lead him onward on the path, grant him peace, happiness and self-realization.

Bow to Shri Sai. Peace be to all.