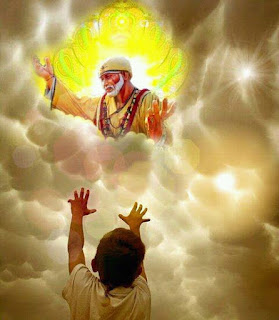 This is not a story or fiction. Every Sai devotee experiences such strange incidents, one way or the other, either mentally, morally or physically in their day to day walks of life. I am no exception and I came across one such incident that happened in our family.

On 27th June, 2002 my cousin, Sri Haran's marriage with Sow. Sumathi took place at Kosapel, Vellore, Tamilnadu. Both of them went to Kodaikanal for honeymoon. It is a place of tourist interest with greener and scenic beauty. While they were enjoying the natural beauty a co-tourist, requested Mrs. Sumathi to click a snap for them and she agreed. Mr. Haran was also watching the proceedings. Sumathi did not notice the slippery land. While moving front and back in order to compose the picture, she positioned herself on the floor to take the snap which was 60 ft. high from the ground level. Within a few seconds the slippery ground where she was standing started sinking gradually and half of her body started immersing inside the wet land. She lost her balance and immediately shouted "HARAN PLEASE SAVE ME" repeatedly. On hearing the cry Haran without any second took the name of Sai Baba and prayed for Sumathi's survival and jumped near the same spot where her body was sinking gradually. Except her hair nothing was visible. He caught hold of her hair and protected further drowning of the body.

At the moment a strange person who was watching the entire proceedings, whom I strongly feel none other than Baba rushed to the nearby telephone booth, requisitioned for the Fire Brigade, equipments such as rope etc and also the people who were nearby were asked by the same person to assist the victims in all possible manner. After a big struggle both the victims were taken out.

Due to head injury Sumathi was unconscious. She was given immediate first aid by Mr. Haran, by gently beating both sides of her cheeks and sprinkling water etc. Haran was keeping Baba's Vibhooti always in his pocket and at that time he applied the same on forehead and a spoon full of water diluted with vibhooti was also given orally. She regained her senses and was admitted into a local hospital and later on shifted to Vellore Hospital for further treatment.

Both of them got recouped after hospitalization, due lo Baba's love and mercy.