Mysterious is the path of action 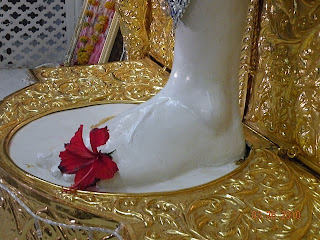 Baba said, "You see mysterious is the path of action. Though I do nothing, they hold Me responsible for the actions which take place on account of destiny." – Sri Sai Sai Satcharita, Ch. 34.

A true story from Loran in J&K (Poonch & Rajouri) Sector. A tale reflecting the character & high values of the brave men guarding the nation...

They were on their way to the post where they would be deployed for next three months. The batch being relieved was waiting anxiously for their arrival so that they could fall back to safer confines of their parent unit. Some would proceed on leave and meet their families. They were happy that they were to relieve a set of comrades who had done their job. It was a treacherous climb and the journey was to last till the next evening. Cold winter month with intermittent snowfall added to the torture.

If only someone could offer a cup of tea, the Major thought, knowing completely well that it was a futile wish.

They continued for another hour before they came across a dilapidated structure which looked like a small shop. It was locked.

It was 2 o'clock in the night and there was no house close to the shop where the owner could be located. In any case it was not advisable to knock any doors in the night for security reasons.

It was a stalemate. No tea boys, bad luck.

The Major told the men to take some rest since they had been walking for more than three hours now.

Sir, this is a tea shop indeed and we can make tea. We will have to break the lock though. The officer was in doubt about the proposed action but a steaming cup of tea was not a bad idea. He thought for a while and permitted for the lock to be broken. The lock was broken.

They were in luck.

The place was a shop indeed and had everything required to make tea, and also a few packets of biscuits.

The tea was prepared and it brought great relief to all in the cold night. They were now ready for the long and treacherous walk ahead of them and started to get ready to move.

The officer was in thoughts. They had broken open the lock and prepared tea and consumed biscuits without the permission of the owner. The payment was due but there was no one in sight.

The Major was not however moving out without doing what was to be done. He took out a Rs 1000/- note from his wallet and kept it on the counter, pressed under the sugar container, so that the owner sees it first thing when he arrives in the morning.

He was now relieved of the guilt and ordered the move.

Days, weeks and months passed. They continued to do gallantly what they were required to do and were lucky not to loose any one from the original group in the intense insurgency situation.

And then one day, it was time to be replaced by another brave lot.

Soon they were on their way back and stopped at the same shop, which was today open with the owner in place. He was an old man with very meager resources and was happy to see eight of them with the prospect of selling at least eight cups of tea that day.

All of them had their tea and spoke to the old man about his life and experiences in general, selling tea at such remote a location.

The poor, old man had many stories to tell all of them, replete with his faith in God.

"Kya Baba, yadi Allah hota to kyaa aap ke jaisa 'Allah kaa bandaa' is haal main hota, said one of them"; moved by his poverty and faith in God.

I got the proof a few months back.

I was going through very tough times because my only son had been severely beaten by the terrorists who wanted some information from him which he did not have. I had closed the shop early that day and had taken my son to the hospital. There were medicines to be purchased and I had no money. No one would give me a loan from fear of the terrorists. There was no hope, Sahib.

And that day Sahib, I had prayed to Allah for help.

And that day Sahib, Allah walked into my shop.

When I returned to my shop that day and saw the lock broken, I thought someone had broken in and had taken away whatever little I had. But then I saw that 'Allah' had left Rs 1000/-under the sugar pot. Sahib, I can't tell you what that money was worth that day. Allah exists Sahib, he does.

I know people are dying every day here but all of you will soon meet your near and dear ones, your children, and you must thank your God Sahib, he is watching all of us. He does exist. He walked in my shop that day. I know he did."

The faith in his eyes was unflinching.

Seven set of eyes looked t their officer and read the order in his eyes clear and unambiguous, 'Keep quiet.'

The officer got up and paid the bill and hugged the old man.

"Yes Baba, I know, God does exist - and yes the tea was wonderful".

Seven set of eyes did not miss the moisture building in the eyes of the Major, a rare sight.