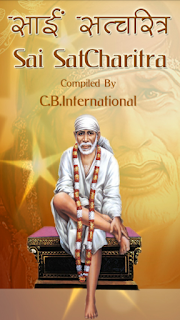 In this Chapter, Hemadpant relates the stories of Vinayak Harishchandra Thakur, B.A., Anantrao Patankar of Poona, and a pleader from Pandharpur. All these stories are very interesting which if very carefully read and grasped, will lead the readers on to the spiritual path.

It is a general rule, that it is our good luck in the form of accumulation of merits in past births, that enables us to seek the company of Saints and profit thereby. In illustration of this rule, Hemadpant gives his own instance. He was a resident Magistrate of Bandra, A suburb of Bombay, for many years. A famour Mahomedan Saint named Pir Moulana was living there and many Hindus, Parsis and many others who followed different religion used to go to him and take his darshan. His Mujavar (priest) by name Inus pressed Hemadpant many a time, night and day, for going to see him, but for some reason or other he was not able to see him. After many years his turn came and he was called to Shirdi where he was permanently enlisted in Sai Baba's Darbar. Unfortunate fellows do not get this contact of the Saints. It is only the fortunate ones that get it.

There have been institutions of Saints in this world, from time immemorial. Various Saints appear (incarnate) themselves in various places to carry out the missions allotted to them, but though they work in different places, they are, as it were, one. They work in unison under the common authority of the Almighty Lord and know full well what each of them is doing in his place, and supplement his work where necessary. An instance illustrating this is given below.

Mr. V.H.Thakur, B.A., was a clerk in the Revenue Department and he once came to a town named Vadgaum near Belgaum (S.M. Country) along with a Survey party. There he saw a Kanarese Saint (Appa) and bowed before him. The Saint was explaining a portion from the book "Vichar-Sagar" of Nischaldas (a standard work on Vedanta) to the audience. When Thakur was taking his leave to go, he said to him, "you should study this book, and if you do so, your desires will be fulfilled, and when you go to the North in the discharge of your duties in future, you will come across a great Saint by your good luck, and then he will show you the future path, and give rest to your mind and make you happy".

Then, he was transferred to Junnar, where he had to go by crossing Nhane Ghat. This Ghat was very steep and impassible, and no other conveyance, than a buffalo was of use in crossing it. So he had to take a buffalo-ride through the Ghat, which inconvenienced and pained him much. Thereafter, he was transferred to Kalyan on higher post, and there he became acquainted with Nanasaheb Chandorkar. He heard much about Sai Baba from him and wished to see Him. Next day, Nanasaheb had to go to Shirdi, and he asked Thakur to accompany him. He could not do so as he had to attend the Thana Civil Court for a civil case. So Nanasaheb went alone. Thakur went to Thana, but there the case was postponed. Then, he repented for not accompanying Nanasaheb. Still he left for Shirdi and when he went there, he found that Nanasaheb had left the place the previous day. Some of his other friends, whom he met there, took him to Baba. He saw Baba, fell at His Feet and was overjoyed. His eyes were full of tears of joy and his hair stood on end. Then after a while the omniscient Baba said to him - "The path of this place is not so easy as the teaching of the Kanarese Saint Appa or even as the buffalo-ride in the Nhane Ghat. In this spiritual path, you have to put in your best exertion as it is very difficult". When Thakur heard these significant signs and words, which none else than he knew, he was overwhelmed with joy. He came to know, that the word of the Kanarese Saint had turned true. Then joining both hands and placing his head on Baba's Feet, he prayed that he should be a accepted and blessed. Then Baba said - "What Appa told you was all right, but these things have to be practised and lived. Mere reading won't do. You have to think and carry out what you read, otherwise, it is of no use. Mere book-learning, without the grace of the Guru, and self-realization is of no avail". The theoretical portion was read from the work `Vichar Sagar' by Thakur, but the practical way was shown to him at Shirdi. Another story given below will bring out this truth more forcibly.

One gentleman from Poona, by name Anantrao Patankar wished to see Baba. He came to Shirdi, and took Baba's darshan. His eyes were appeased, he was much pleased. He fell at Baba's Feet; and after performing proper worship said to Baba - "I have read a lot, studied Vedas, Vedants and Upanishads and heard all the Purnas, but still I have not got any peace of mind; so I think that all my reading was useless. Simple ignorant devout persons are better than myself. Unless the mind becomes calm, all book-learning is of no avail. I have heard, from many people, that you easily give peace of mind to so many people by your mere glance, and playful word; so I have come here; please take pity on me and bless me". Then Baba told him a parable, which was as follows:-

"Once a Soudagar (merchant) came here. Before him a mare passed her stool (nine balls of stool). The merchant, intent on his quest, spread the end of his dhotar and gathered all the nine balls in it, and thus he got concentration (peace) of mind".

Mr. Patankar could not make out the meaning of this story; so he asked Ganesh Damodar, alias Dada Kelkar, "What does Baba mean by this?" He replied - "I too do not know all that Baba says and means, but at His inspiration I say, what I come to know. The mare is God's grace and the nine balls excreted are the nine forms or types of Bhakti, viz., (1) Shravana (Hearing); (2) Kirtana (Praying); (3) Smarana (Remembering); (4) Padasevana (resorting to the feet); (5) Archana (Worship); (6) Namaskara (Bowing); (7) Dasya (Service); (8) Sakhyatva (Friendship); (9) Atmanivedana (surrender of the self). These are the nine types of Bhakti. If any of these is faithfully followed, Lord Hari will be pleased, and manifest Himself in the home of the devotee. All the sadhanas, viz. Japa (vocal worship), Tapa (penance), Yoga practice and studying the scriptures and expounding them are quite useless unless they are accompanied by Bhakti, i.e., devotion. Knowledge of the Vedas, or fame as a great Jnani, and mere formal Bhajan (worship) are of no avail. What is wanted is Loving Devotion. Consider yourself as the merchant or seeker after the truth and be anxious and eager like him to collect or cultivate the nine types of devotion. Then you will attain stability and peace of mind".

Next day, when Patankar went to Baba for saluation, he was asked whether he collected the 'nine balls of stool'. Then he said that he, being a poor fellow, should first be graced by Baba, and then they will be easily collected. Then Baba blessed and comforted him, saying that he would attain peace and welfare. After hearing this, Patankar became overjoyed and happy.

We shall close this Chapter with short story showing Baba's omniscience and His using it for correcting people and setting them on the right path. Once a pleader from Pandharpur came to Shirdi, went to the Masjid, saw Sai Baba, fell at His Feet and, without being asked, offered some Dakshina, and sat in a corner eager to hear the talk, that was going on. Then Baba turned His face towards him and said - "How cunning the people are! They fall at the feet, offer Dakshina, but inwardly give abuses behind the back. Is not this wonderful?" This cap (remark) fitted the pleader and he had to wear (take) it. None understood the remark. The pleader grasped it, but kept silent. When they returned to the Wada, the pleader said to Kakasaheb Dixit - "What Baba remarked was perfectly right. The dart (remark) was aimed at me, it was a hint to me, that I should not indulge in reviling or scandalizing others (calling by names). When the subjudge or munsiff of Pandharput (Mr.Noolkar) came and stayed here for the improvement of his health, a discussion about this matter was going on in the bar-room at Pandharpur (as it ever happens in many a bar-room). It was said or discussed there whether the ailments, from which the sub-judge suffered were, ever likely to be got rid of without medicines, by merely going after Sai Baba, and whether it was proper for an educated man, like the sub-judge, to have recourse to such methods. The sub-judge was taken to task, i.e. he was ciritisied, as also Sai Baba. I also took some part in this affair; and now Sai Baba showed the impropriety of my conduct. This is not a rebuke to me, but a favour, an advice that I should not indulge in any scandal or slander of others; and not interfere unnecessarity in others' affairs".

Shirdi is about 100 Koss (Koss=3 miles) distant from Pandharpur; still Baba by His omniscience knew what transpired there in the bar-room. The intervening places -- rivers, jungles and mountains - were not a bar to His all-perceiving sight and He could see or read the hearts of all. There was nothing secret or veiled from Him. Everything, far or near, was plain and clear to Him as broad as daylight. Let a man be far or near, he cannot avoid the all-pervading gaze of Sai Baba. From this incident, the pleader took the lesson that he should never speak ill of others, nor unnecessarily criticize them. This his evil tendency was completely got rid of, and he was set on the right path.

Though the story refers to a pleader, still it is applicable to all. All should, therefore, take this lesson to heart and profit thereby.

Sai Baba's greatness is unfathomable, so are His wonderful Leelas. His life is also such; for He is Para-Brahman (Lord God) incarnate.

Bow to Shri Sai - Peace be to all