​Baba Saves from a Train Accident 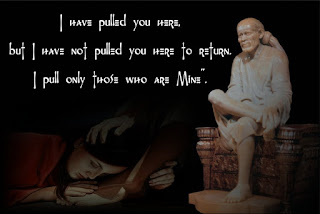 ​Baba Saves from a Train Accident

Among those, who visited Shirdi in company with Das Ganu for Ramnavami Utsav (1924), there was a resident of the Mughal City of Mukhed, by name Shri Baba Ramchandra Pathewar with his wife Sow.  Krishnabai. This gentleman (Pathewar) was one of the bhaktas, who often went to Shirdi. When the function was over, that gentleman and his wife and Damooanna, a disciple of Das Ganu started from Shirdi for Bombay (via Manmad). They took the passenger train at Manmad at 3 a. m. and reached Thane at 11 a.m. (i.e. the next day).

On account of the scorching heat of the sun, Krishnabai felt very thirsty. As the train stopped at Thane for some time, she got down from her carriage with a vessel to take drinking water from the tap. She and two others had their carriage at the end of the train and the tap was far away near the engine. So she went there. On account of the crowd around the tap, she had to wait for long. Her husband (Baba R. P.) seeing that she had not returned for a long time got down and went towards the tap. Since it was time for the train to start and as these two had not returned, Damooanna also got down and started to go to the tap, but before he could reach the tap, the guard blew the whistle. Therefore Damooanna cried out to both of them, "Get into whatever carriage you can" and he himself got into another carriage. The train was beginning to move. With great haste, Baba R. P. got into a carriage. But Krishnabai had the vessel in her hand and the train was going at its own ordinary speed. So when she tried to get in, her foot slipped and she fell down between the platform and the train. Her husband and Damooanna were trying to see if she got into the train. When they saw her falling, they jumped on to the platform and cried out, 'Lady fallen, lady fallen'. Then to stop the train the red flag was shown. Damooanna and Pathewar's throat went dry out of fear. They feared that Krishnabai's body would have been smashed beyond recognition. The train stopped and the people began to look below the carriages.

Meanwhile Krishnabai was seen between the carriage and the platform, trying to stand up. Damooanna ran up and extended his hand to raise her up. People gathered and asked. "What has happened, what has happened?" but the lady was calm and not frightened at all. She said calmly, "Nothing has happened to me; sit in the carriage". Then all went up and got into the carriage. Krishnabai explained, "As soon as my foot slipped, I could not think what would happen; so I naturally thought of Sai Baba. Immediately Sai Baba appeared and he with his hand pressed me below the platform and he stood beside me". Five or six carriages passed and then the train stopped. Having seen Baba, she had no further fear. She continued to see Baba near her till she climbed up the platform. Krishnabai had only one abrasion, a slight scratch near her elbow and nothing else. Though Baba is not in flesh (1924), still he attends fully to his devotees and in times of trouble appears for their benefit and protects them. The above is an excellent instance; and if any one places full faith in Baba, he will get his grace.