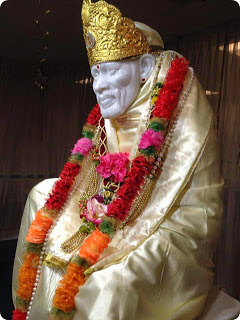 I have eaten a lot and I am satiated and satisfied

Balaji Patil Newaskar quitely went about doing Baba's seva. He swept and cleaned the streets that Baba walked on daily. When it was harvest time he brought the whole harvest to Dwarkamai and offered it to Baba. He and his family happily lived on whatever Baba gave them. In Satcharita the wonderful Leela of how his fam­ily fed thrice the number of guests, is given. It was Bala's annual Shradha ceremony.  His daughter-in-law diligently cooked food enough for the estimated num­ber of guests.   While she was serving them, she real­ized that thrice the number of guests had arrived. With Baba's grace and a little Udi, the last guest was fed to satiety with plenty of food remaining. (Sai Satcharitra Ch. 35).

This is a similar Leela whereby Baba's grace not three­fold but a multitude of guests were fed with food re­maining.

When Purandare once visited Shirdi, he stayed with Bala Shimpi.   Baba told him that He would come to dine with him, along with two other Fakirs.  With great joy, Purandhare asked Baba what he should prepare. "Make rice, sheera, bhaji, two vegetable curries and masala khichidi," said Baba.   After the Noon Arati, upon his returning home he saw that everything was ready.   Then four to five Fakirs came and had their meals. While leaving, they informed him that many more would soon arrive.  Later, a batch of twenty Fa­kirs arrived.   Satiated, they too left. Then another ten Fakirs came. They too were well fed and food still re­mained. Then Purandare went to Baba with betel leaves and dakshina and invited Him for meals.  Baba smiled and said, "I have eaten a lot and I am satiated and satisfied."   Then Baba asked Purandare to have his meals along with Bala Shimpi. All of them, Purandare's family and Bala dinned together and still food was abun­dant.

Purandare partook the food as Baba's Prasad. He also carried the food to Bombay and distributed it to his friends and relatives and told everyone this wonderful Leela.

Leela- 28 in Ambrosia in Shirdi - Part-I