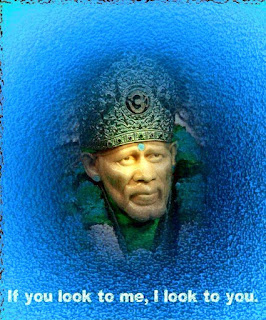 Shri Sai Baba came to my house, to the surprise of all just seventeen years before in the year 1956, in the form of a calendar, through a student of mine by name Kumar Gowri Mathur, when I was working as an Assistant master at Shri M. V. Pathare High School, Rabkari District Bijapur, Mysore State now known as Karnataka. Since that day, I have been an ardent devotee of Shri Sai Baba. I had a great desire to visit His Shrine at Shirdi, but I neither hand an opportunity nor die permission of Shri Sai Baba till October, 1968 in conformity with the belief that nothing on the earth happens without His will With the blessings of Shri Sai Baba, I used to get money whenever I was in need. Even when I was badly in a need of a big sum, I started from home in the morning simply uttering his name and by evening before I returned home, I had the amount that I needed and cleared off my dues. I never knew how, but somehow somebody came forward to offer the money and helped me to get out of the difficulties that I was in trouble.

In the year 1959, I took the M.Ed. Examinations of Karnataka University, Dharwar. Just before the examinations for about 15 or 20 days, I strained every nerve and left no stone unturned by burning mid-night oil during the course of studying. But as ill luck would have it, on the day of examination, a severe half headache began to trouble me from the very morning. I was in a fix. I did not know what to do. I was on the hours of dilemma. All through the morning till 10.00 clock, I was vacillating whether to go to the examination hall and whether  to take or not to take the examination. But 10-00 clock for about 5 minutes, I kept quiet and began to see the inward mind through the inward eye. This five minutes meditation spared me on to offer prayers to Shri Sai Baba and to go to the examination hall with his unseen blessings. This inspiration made me burn the incense in the form of Agarbathi before the photo of Shri Sai Baba presented to me by a class mate of mine during one of the sessions of M.Ed., classes.

After burning the incense, I smeared the UDI to my forehead with a prayer to Shri Sai Baba to help me in my venture. Thus throwing all the responsibility and faith in Baba. I entered the examination hall. When the question papers and answer books were distributed, I uttered Baba's name and began to answer the paper. I finished the paper within a two and quarter hours. I never knew what I wrote. So all my friends asked me with surprise whether I had really finished the paper or not. They were also in doubt regarding my success. The only answer I gave them was that I had done my job with full faith in Baba and then it was left to Him to bring me success or failure. My headache continued till the last paper and when I completed it my headache suddenly stopped. If this is not a miracle, then what it is? To the surprise of all, I was declared successful at the M Ed. examination no doubt due to the miracle wrought by Shri Sai Baba. In the year 1960, when I was in the central institute of Engineering, for the course in the teaching of Engineering, one co-trainee persuaded me to switch over to Maharashtra as Head Master and promised that he would try for that. He kept up his promise and in 1961, I switched over to Maharashtra as Head Master of a secondary school from Karnataka. Since June, 1961, till this day, I have been in the services of Maharashtra State. Thus Baba dragged me to Maharashtra the province of His shrine. Very recently when I was at Poona, to take the M.A. Examination in November 1972, Shri Sai Baba visited my residence in my absence at Gulunche in the form of a Fakir. On enquiry, he told that he had come from Shirdi. He was offered groundnuts but He demanded rice in lieu of groundnut. He accepted the little bit of rice that was offered to Him and blessed all the members of my family saying "Allah Bala Karega" and within in a moment he disappeared.

On my return from examination, I started reading Sai Satcharitra in English with a request to Baba to make my result known to me before I completed the Satcharitra. To my great surprise that 10 to 12 days before the date of result I received a message invitation card bearing the words M.A.,M.Ed. after my name. This suggested to me that I was going to be successful in the M.A, Examination.

And so it happened. Twice in the year 1968, I had the good luck to pay homage to His Shrine at Shirdi. During my stay there, my inner voice suggested to me to become a Life Member and to be in the service of Shri Sai Baba till last breath. A peculiar experience that I had was that the Fakirs of Shirdi never demanded anything from anybody and were satisfied with what they got. This sort of complete satisfaction and surrender to the will of Shri Sai Baba is not found in any other place. I have still some ambition to be filled and I hope that a firm faith in Him will help me towards the attainment of my goal. I pray for His choicest blessing to all His devotees.

(AMBROSIA IN SHIRDI - STORIES AFTER BABAS MAHASAMADHI ON 15-10-1918 - WRITTEN BY RAMALINGASWAMY, Ambrosia-15)