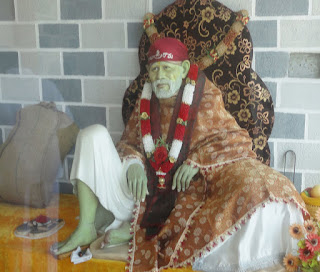 (17) HOW BABA FULFILLED THE WISHES OF CHILDLESS COUPLES...

Many childless couples have been blessed with Baba's grace and they are happy. Rao Bahadur Hari Vinayak Sathe, Damu Seth Kesar of Ahmednagar, Ratanji Seth of Nanded, Gopal Gund, Deshmukh of Raver, all came to Sai Maharaj to be blessed with a son and Baba blessed them all. They are all hale and hearty. But, you will also find many other childless devotees among the common people who have been similarly blessed by Baba.

Innumerable childless women came during the Ramnavami Yatra and even every Thursday, some took vows in their own homes and Baba fulfilled their wishes too. Once, a woman from Pune who was anxious to have a son took a vow. Soon after, Baba visited her in her dreams and gave her a coconut. When she awoke, there really was a coconut kept near her bed. She was thrilled and later on, in due time gave birth to a son. When he was a year old, she came to Shirdi and did the Javal ceremony (shaving off the baby's hair) in Baba's presence.

It was observed that whenever a woman came to Baba desiring a son, she was blessed with a baby boy.

And, this happened whenever they took a vow even after He had taken His Samadhi.

A recent example is that of Jagannath, who used to look after Baba's horse.

After Baba's Samadhi, he became a holy man and sat in the Shiva temple at Ulve  village in Panvel district. There he met Umabai, the wife of Seth Shankarraoji. The couple did not have a son and so she coaxed her husband to take a second wife.

But, she did not conceive either.

One day, at Umabai's behest, Jagannath placed a coconut in the second wife's Pallu and said, "If this lady begets a son, you will visit Baba's Samadhi." Umabai took a vow - 'If the co-wife begets a son, I will come for your Darshan.' Within a year, a son was born. And, Umabai came to Shirdi to fulfil her vow. Jagannath had later left Ulve village; but when Umabai visited Shirdi for Baba's Darshan, he too happened to be there. Umabai offered a coconut with a specially made golden grain of salt tied to its tip. The coconut is still there in the Sansthan's warehouse.

A gentleman's son was lost for many years. He prayed to Baba about his son.

Baba said, ''You will meet him soon." After two days Baba gave him permission to leave. He lived at Thane. As he alighted at Thane station, his son too got down from a train coming from Mumbai.

Thus he met his long lost son in his own town as soon as he returned from Sai Maharaj.

Once, Madhavrao Deshpande had a dream. In it, Baba visited him and asked, ''did you visit Govardhandas? His mother passed away. We should visit him." When Madhavrao visited Govardhandas in the late afternoon he found that he had indeed lost his mother a couple of days ago.

Shri Dwarkanath Pradhan had gone to Maharaj for Darshan and had taken his father-in-law's letter to Baba. When he gave the letter to Baba, He held it upside down and murmured, 'Is she going?' I heard these words; but the others did not.

He then asked the letter to be read out. It spoke of Dwarkanath's wife's illness.

Dwarkanath asked Baba, "When will you bring her here?" Maharaj replied, "After four days."

Everyone was surprised, when the lady died four days later. Only I was not surprised, as I had heard Baba's words.

Pradhan finished all his money on the second day. Baba once again asked him for Dakshina. He said, "I do not have any money."

Baba said, "Ask Annasaheb." Now, everyone knew since the previous day that Annasaheb had no money left, and it was true. However, obeying Baba, Pradhan went to Annasaheb and asked for money. Annasaheb was surprised as just a little while ago, someone had delivered the money, he had asked for from his home in Bandra and nobody knew about it. When Annasaheb asked Pradhan, "How did you know I just received some money?" He said, ''how would I know? I came because Baba sent me!"

Translated from Marathi into English by Jyoti Ranjan Raut