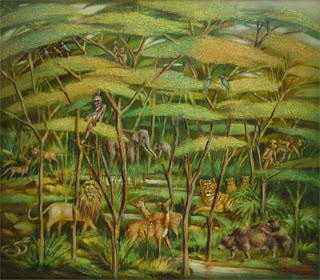 One day, Akbar and Birbal were going around the country, dressed to conceal who they were. In a village they found a very old man planting a sapling of mango.

Akbar came near the old man and asked him why he was planting a sapling at the old age when he would not hope to live to eat its fruits.

The old man replied that he enjoyed the fruits of mango trees which his father had planted. He added that his son would enjoy the fruits of the mango trees planted by him. He then made a quick remark saying that was how actions that took long time to bear fruit were carried out.

The old farmer had a hearty laugh and said that his good act of planting a sapling of mango that day had helped him to get a fruit – a bag of gold coins as a gift.

Akbar was delighted that the old man's spoken words matched his good judgement. He gave him another bag of gold as a reward for his wisdom.

The old farmer said that mango tree normally yielded fruits once a year, or once in two years but his tree gave him two crops (gifts) in a single day.