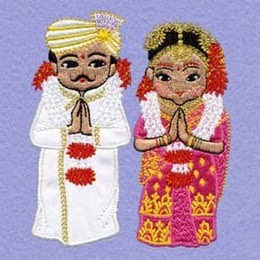 Despite antiquity of Vedas, they preach the most modern and the most progressive thoughts. Woman enjoys high position at home as well as society according to Vedas. The Vedas make no distinction between men and women in their pursuit to acquire knowledge both physical and spiritual.
The yajur veda, 20.9, says: “There are equal rights for men and women to get appointed as ruler.” *

And the atharva veda, 14.2.71, says : “Hey wife! I am knowledgeable and you are also knowledgeable. If I am Samved then you are Rigved.”

Women and men are equal in the eyes of dharma: “O women! These mantras are given to you equally (as to men). May your thoughts, too, be harmonious. May your assemblies be open to all without discrimination. Your mind and consciousness should be harmonious. I (the rishi) give you these mantras equally as to men and give you all and equal powers to absorb (the full powers) of these mantras.” Rigveda 10-191-3. **

The idea of equality was most forcibly expressed in the Rig Veda (Book 5, hymn 61. verse 8). The commentator explains this passage thus: "The wife and husband, being the equal halves of one substance, are equal in every respect; therefore both should join and take equal parts in all work, religious and secular." No other Scripture of the world have ever given to the woman such equality with the man as the Vedas of the Hindus. ***

The Kama-sutra, although talk about all kinds of relationships, explain for those interested in doing their best in this world: “That should be known as a high connection when a man, after marrying a girl, has to serve her and her relations afterwards like a servant, and such a connection is censured by the good. On the other hand, that reproachable connection, where a man, together with his relations, lords it over his wife, is called a low connection by the wise. But when both the man and the woman afford mutual pleasure to each other, and when the relatives on both sides pay respect to one another, such is called a connection in the proper sense of the word.

Therefore a man should contract neither a high connection by which he is obliged to bow down afterwards to his kinsmen, nor a low connection, which is universally reprehended by all.” It’s interesting to notice that the kind of relationship that one should look for is the one where there is equality and none of the two persons are the one who gives the orders and nor the other is the one who obeys, and that extend also to the families of both persons.

But even if that happenes, a high conection is the one where the woman and her relatives are served, and the low conection is the one where the man and his relatives are served. And, about the relation where man serve women and her relatives, it says that it’s not good for the man. But the relation where the man lords over his wife and she has to obey him and his relatives is “universally reprehended by all”! Is that what we see in India today? Is this kind of relation reprehended by all, or people praise this kind of relationship and are very happy to see wives who are obedient and submissive to their husband’s and his family’s will?

That gives us more ideas about how the traditions are lost and the need to bring the real traditions back to life again. What we are doing nowadays should be reprehended by all!!!!****